The world’s most beautiful train station

Antwerpen- Centraal train station in Antwerp  Belgium, frequently appears on lists of the world’s  most beautiful train stations, and really who can quibble with that?

Built in a jaw-dropping melange of architectural styles, the Circa-1905 structure,  with its cavernous waiting hall and massive dome , is so unabashedly decorative it could rival and opera house or palace for pure spectacle.

It’s first and foremost,  Antwerp’s transportation hub. Most fans of extraordinary public buildings are likely grateful that a full scale restoration project in the 1980’s brought the Belgian treasure  back to its former position. 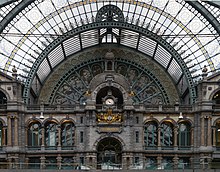